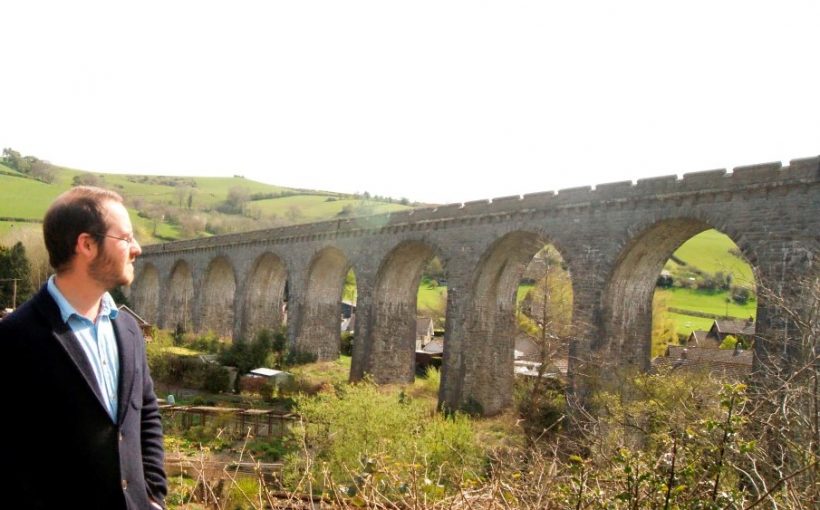 The imposing and characterful viaduct that towers over the village of Knucklas in Powys was the model for Knucklas Arches, a new three-movement work for violoncello and piano by composer Robert Peate, which will receive its premiere at this year’s Presteigne Festival on 26th August 2017. Commissioned for the event with funding generously provided by Kevin Jones and Laura Woodside-Jones, Knucklas Arches is to be performed by Gemma Rosefield on cello and Tim Horton on piano

“On a visit to Knucklas in spring 2016, the sight of this 13-arch viaduct – which seems almost to grow out of the landscape – began to suggest music. Viewing it from various perspectives, including from nearby Offa’s Dyke, noting features such as the inlaid crucifixes at each end, learning more of the history and folklore behind the structure, and the distinctive beauty of the surrounding landscape, all fed my approach” says Rob.

The music presents a kind of lofty, even ecclesiastical impression in the first movement, where a distant low C and high F sharp are joined by a 13-note ‘bridge’. The second movement moves through more playful motor-rhythms, based largely on a rapid ’13-arch ostinato’ played on ‘cello harmonics, and inspired partly by the sound of the occasional passing train, as well as by an old story associated with the viaduct concerning a hunt and a suicidal fox! The final more lyrical movement was mostly inspired by viewing the viaduct from end to end, and the resulting effect of each arch gradually seeming taller the nearer they get. Each melodic ‘arch’ (13 in all) grows in range and in expressive intensity before melting back into a final wider ‘image’ of the viaduct to conclude.

Comissioned for the Presteigne Festival with funding generously given by Kevin Jones and Laura Woodside-Jones, Knucklas Arches is set to be premiered by Gemma Rosefield – ‘cello and Tim Horton – piano, at the 2017 Presteigne Festival.

Get your copy of Knucklas Arches from Composers Edition here.