The University of Birmingham presents the second CrossCurrents festival 16 – 23 February 2018.  Featuring richly diverse mix of music and events and world-class artists alongside student ensembles, the festival concludes with premieres by Michael Zev Gordon and Ryan Latimer, performed by the Loki Ensemble. 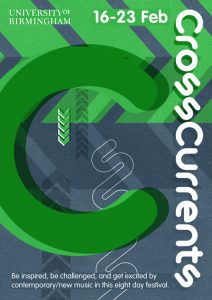 “Amongst us we have worked with established groups such as LSO, BBC Phil, Britten Sinfonia, West East Divan Orchestra and with such musicians as Lorin Maazel, Daniel Barenboim and Pierre Boulez.  We’ve also trodden less familiar paths with performances in folk music, performance art, theatre, dance.  We’re all musicians dedicated to contemporary music and the collective number of first performances we’ve all been involved with must go in to the many hundreds.

So, I’m delighted to bring this group together and excited that Ryan and Michael have agreed to write pieces for us. I teach at Birmingham Conservatoire and knew Ryan when he was a student their.  His pieces are so vibrant, fresh and inventive. I can’t wait for Michael’s piece. I’ve conducted his works before and listened to many.  It’s so strong, imaginative, colourful and thought provoking.  I’m sure these pieces will sit well alongside the Richard Ayres premiere.  We are also going to play Pierrot Lunaire in the concert…I’m quite keen that something old can be heard alongside the new pieces that also tie up the threads in this final concert of CrossCurrents that is focusing on music with British and German links.”