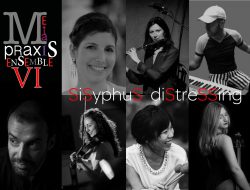 Gregory Emfietzis on the upcoming staged production of Sisyphus...

John Palmer’s Yahari (for guitar) receives its world premiere, performed by Johannes Monno on Monday 13th November in the Chamber Music Hall of the University of Music and Performing Arts of Stuttgart.

Johannes Monno is one of the finest guitarists in Europe and professor at the University of Music of Stuttgart.

In the Japanese language the word yahari means: in spite of, also (too), still (as before), even so (nonetheless), as expected (of course). Such apparent contradictions of meaning remind me of the challenging nature of Zen postulates such as the koan. With Yahari I wanted to explore states of consciousness resulting from the resonance of an “intangible”, almost “transparent” sonic dimension.

Yahari was written for Johannes Monno, to whom is dedicated.

Before then, on Wednesday 8th November, Palmer’s Incidental (from Musica Reservata) will be performed by pianist Heloïse Ph. Palmer oat the City Library in Merseburg, Germany. November 8 2017 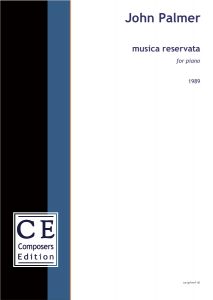 Musica reservata is a collection of 12 short pieces for solo piano composed from December 1988 to May 1989, mostly during the night. The title refers to the notion of musica reservatamentioned by Adrian Petit Coclico, a pupil of Josquin Des Prez, who coined the word in the preface to his book Compendium musices (Nuremberg, 1552). Although there is no consensus on the meaning of the term, we know that it must have referred to a music that made use of chromaticism and voice leading as devices for stressing emotions in motets and madrigals of the 16th century. Musica reservata also referred to a music performed in small circles such as the aristocratic courts of that time, implying a sense of intimacy and inwardness.