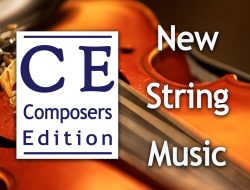 Saturday 27th October sees two premieres for Graham Lynch, both commissioned by the International Guitar Forum, taking place at Kings Place as part of the London Guitar Festival. The first, Masques, is a piece for solo guitar, in a lunchtime concert, performed by one of the winners of the Young Artist Platform; and the second, Waltz Cocteau, is for the Eurostrings Artists ensemble – on this occasion a group of eight guitarists drawn from prize winners at major European guitar competitions and taking part in the ‘Big Night of the Guitar’.

On the 3rd October will be the UK premiere of French Concerto in a new version for soprano saxophone, violin, and piano. This piece was originally commissioned by Marie van Rhjin (of Les arts Floiurrisasant) for her ensemble Trio Dauphine, and later taken up by the Omni Ensemble in New York. This performance is by the Mifune Tsuji Trio and will be at United Reform Church in Cambridge, with a follow up performance on the 27th October at Anglia Ruskin University.

On the 23rd October guitarists Rody van Gemert and Jose Casallas will perform at the incredible Rock Church in Helsinki. The programme is devoted to pieces by Lynch and Columbian composer Yimy Robles. The concert will feature the first performance of a revised version of Figures from Watteau, and Pájaros del Mar (both for two guitars) as well as his Hymn to Apollo, and the monumental Apollo Toccate.

Also, on the 3rd October at St George’s Bristol there will be another performance of Admiring Yoro Waterfall given by Mahan Esfahani as part of the Bristol Keyboard Festival.