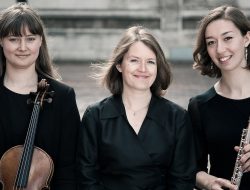 1 May 2018 Comments Off on Argentinian World Premiere for Greig’s ‘Soledad’ for solo guitar Views: 842 CE News

Alastair Greig’s 13 section piece for solo guitar Soledad will be premiered by, Agentinian guitarist and composer Federico Núñez on Friday 4th May. Grieg first met Núñez and Fernando Maglia (both composers and virtuoso guitarists) at a contemporary music festival in Lucca a few years ago and completed the work with their advice.

“Soledad” ( Solitude) is the name of one of the islands of The Malvinas and the piece uses, as starting points, a set of “Thirteen Haiku by a soldier of the War of the Malvinas” by Martin Raninqueo.

Greig says of the this

The conflict was very much an issue when I was in my teenage years but of course we, in the UK, only really saw it from one point of view, in terms of media coverage.

The notion of an English composer writing something for an Argentinian musician based on a different perspective from what I witnessed was something that interested me a great deal. The piece is not programmatic at all, more a series of reflections on the poems and my memory of the rather pointless war.